The Maremma and his protagonists (3) 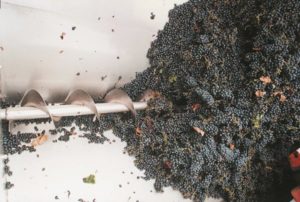 He opened a winery and again consulted Veronelli, who directed him to the most promising wine producers of the period like Sellari Franceschini, Mantellassi, Le Pupille, the Cantina Cooperativa of Scansano – and himself, of course. Classic names, pioneers all. Erik explored, tasted, produced, and became convinced that all the potential was there. What was missing was a market strategy. He had to enter the right “parlours”, the fashionable wine shops. He loaded up his truck and travelled many miles up and down Italy, presenting top Morellinos to top people in Milan, Turin, Bologna, Florence…

“A bold wager, won through small victories and many doors slammed in my face”. 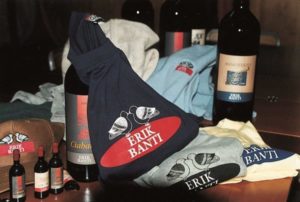 In 1994 Erik left Montemerano and moved a few kilometres away to Scansano. Business was brisk and in just a few years this winery, too, became “old” according to the crushing new market laws. Now, in order to stay on top it was no longer enough just to make good wine – you needed an image, a marketing strategy. Erik shook his head, but adapted. In fact, he relaunched his wines, since he was still driven to be the best. Thanks to billions in investments, the winery had a facelift, a radical overhaul worked out in ambitious designs in the imagination of an eminent architect. The exterior was in brick, “in the style of the Renzo Piano Auditorium in Rome”. In the centre, the dove symbol of Erik Banti, repeated along the drive and illuminated when visitors arrived. Then the new offices, an elegant tasting room with a terrace overlooking the valley, and a Californian-style wine shop where, as well as wines, a place was found for new products: fine foods bearing the dove label (tomato sauces, truffle paste, Roman-style artichokes…) purchased by Erik the gourmet from personally selected traditional producers. And then books, wine and food publications, and gadgets with the Erik Banti logo – t-shirts, hats, corkscrews, and so on. A little something extra, which may not be necessary but makes a difference. 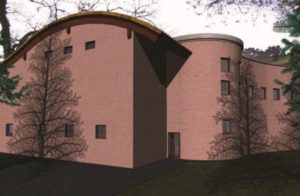 But don’t be taken in by Erik the Dane. While he’s showing you the restyling and telling you that “image is what counts these days”, and confiding that he’d like to stop and sell up, here he is on the front line in the vineyards. When you feel the earth shake under your feet, the wise man said, go back to your roots, to the first day you chose to be what you are. And Erik Banti did just that, purchasing new land at Poggio Maestrino in the heart of the Morellino DOC zone, where the prestigious Annoprimo first saw the light. Every year this wine changes its name (Annosecondo, Annoterzo, etc.) as if to underline the impossiblity of a “serial” work of art. And here is where Erik worked on the great wines of the future. He planted Sangiovese clones, then Merlot, Cabernet Sauvignon, and for fans of foreign varieties, Petit Verdot, Mouvedre, Syrah and Zinfandel – “which is nothing more or less than our own Primitivo”. For the poles in the vineyard he used wood from Swedish Lapland, “where you find the maximum strength in pine”, and pursued lower yields per hectare, in the name of improved quality. At Poggio Maestrino, today and tomorrow, like in Montemerano twenty-five years ago. Following a passionate dream that no business plan can ever erase.