Scansano was renowned for its wine as long ago as the early 1800s when the Napoleonic army decided to make a garrison there for the troops marching to Rome, which was then governed by the Vatican. 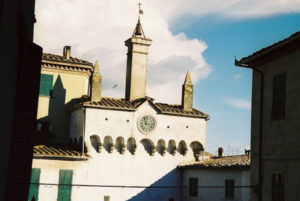 The coasts and plains were so badly affected by malaria that for almost a hundred years all public structures were transferred to Grosseto during the summer; but at 500m above sea level Scansano was unaffected by the disease and the village became the summer capital of Maremma. Some of the officers, who knew as much about winemaking as they did about arms, realized how suitable this area was for winegrowing and for the first time the local products were catalogued. In 1818 the total wine production was 5,000hl, 500 of which were reserved: truly remarkable figures for the period.
The grenache variety was planted here, also known as “tinto di Spagna” or “Alicante” due to the Spanish-owned lands along the coasts: this is the same as the “garnacha” variety grown in Catalonia, in Languedoc to make Chateauneuf du Pape and in Sardinia to make Cannonau; other varieties planted here were syrah, the nero francese or gamay, used to make Beaujolais, and cabernet, which is still (although rarely) found in old vineyards, known as “bordò” to older farmers.

The sangiovese grape which in Scansano is called “Morellino” had been found in this area for some time but it came into its own during the alongside the new winegrowing boom, to the extent that Barone Ricasoli – who hunted in this area – remarked on the quality of the Maremman vines. When the specifications for Chianti wine were drawn up he wanted Scansano grafts on the rootstocks to invigorate the vineyards of the more noble Chianti farms.
In those days vineyards were planted at a very high density (over 10,000 plants per hectare) with the “dense and low” system. At the end of the century there were 500 hectares of vineyards while exactly one hundred years later, in the early 1990s, there were barely 300. The phylloxera disease decimated European vineyards, and war and lack of interest resulted in a severe recession for winegrowing in Maremma. But thanks to the agricultural reform of the 1950s, the rows of vines that for over half a century had been used to divide up the fields rather than to make wine once again played a leading role in Maremma’s farming economy.

Farming was mechanised, to enrich industry, and the vineyards were consequently planted at a density of 2,224 plants per hectare; but because in those days grapes were worth little, the farmers were forced to choose the more generous varieties like the black ciliegiolo or the white trebbiano, allowing them to obtain over 300 quintals (per hectare) and this is still the case in our area.This choice enabled them to live on the fruits of their labour, as dictated by the markets and the obtuse cooperative policies which no-one dared or wanted to oppose.

Necessary Always Enabled
Necessary cookies are absolutely essential for the website to function properly. These cookies guarantee the basic functionality and security features of the website, anonymously.
Functional
Functional cookies help perform certain functions such as sharing website content on social media platforms, collecting feedback and other third party functionality.
Performance
Performance cookies are used to understand and analyze key website performance indices which help provide a better user experience for visitors.
Analytics
Analytical cookies are used to understand how visitors interact with the website. These cookies help provide information on visitor numbers, bounce rate, traffic source, etc.
Advertisement
Advertising cookies are used to deliver relevant ads and marketing campaigns to visitors. These cookies track visitors to websites and collect information to deliver personalized ads.
Others
Other unclassified cookies are those that are analyzed and have not yet been classified into a category.
Save & Accept